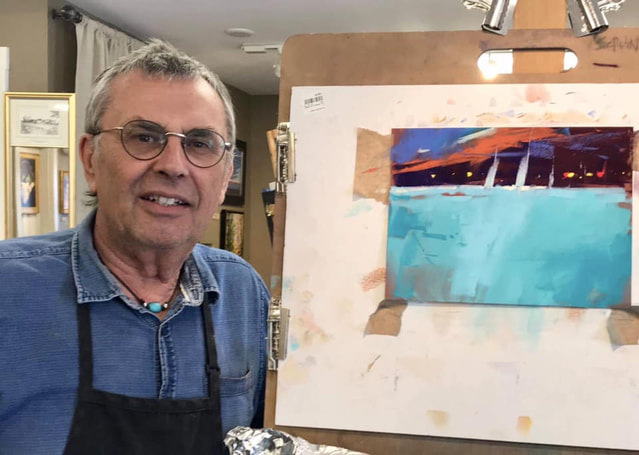 Tony began painting at a very early age and held his first exhibition when he was just 17yrs old. As a pastel painter, Tony has gained many awards in juried competitions, Regionally, Nationally and Internationally as well as being accepted into the most prestigious Galleries. His paintings are in collections around the world, including England, France, Australia and New Zealand.

A commission of 12 of his paintings are in the private collection of Cunard and are on display aboard their flagship “Queen Mary ll”. His work can also be found on permanent display at Government House in Alderney and in the Maritime Museum at Castle Cornet in the Channel Islands where he was born. Tony moved to Nelson with his wife Beryl in 2006.

Tony says: “I am an impressionist painter of light and movement. I am not interested in pure representation; my work is about responses to the moods and atmospheres generated by landscape, still life or interior. I take an everyday scene, and through a subtle approach, focusing on light, colour and tone, I try to give the motif an elevated atmosphere.
​
My subjects are often oriented around the mood of the sea, skies, harbours, ships and figures. I am constantly absorbing everything that is around me. I am interested in new ideas and art forms and find that the more I work, the more I discover.
Drawing is essential as a tool of discovery. Skill and mastery of technique are also essential, but only as a vocabulary and a means towards an idea. I struggle to always keep an open mind.”

Tony was awarded PANZ’s highest honour, Master Pastelist, at the 2014 PANZ convention in Invercargill.
​He is also a Signature Member of the Pastel Society of America.
EMAIL TONY ALLAIN