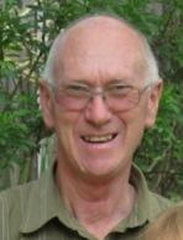 I guess I had been looking for an artistic outlet, when prior to December 1989 I walked into a local stationery shop and for some unknown reason, came out with a pad and a set of drawing pencils.
I had been a keen photographer since about eight or nine years old and in adulthood I bought and sold so many cameras I could have opened my own camera store. As a member of the Southland Photographic Society in Invercargill I rose through the grades to become an A grade worker and am now a judge.
I attended Community Art classes for about 18 months, learning that I could draw, became hooked on pastels and that there were others in the class who, like me, felt there was a need for a like-minded group. I replied to an advertisement in an Australian art magazine by Walter Scott, seeking expressions of interest from artists in establishing a New Zealand pastel society. I became a foundation/charter member and as a journalist, took on the role as its editor a position I have continued to hold and enjoy. Two years ago, I also took on the added role of PANZ Secretary.
PANZ's newsletter, New Zealand Pastel Artist, has come a long way since its founding back in April 2002, from a primitive dot-matrix-printed, double-sided A4 newsletter to a 12-14 page full-colour publication, issued five times a year.
In October 2002, I organised a pastel workshop in Invercargill out of which the Southern Pastel Artists group was established. I am the co-spokesperson and have been the co-ordinator of the Southern Pastel Artists' exhibitions in Invercargill since 2003. Each year there has been an increase in number and quality of paintings and a greater appreciation and following by the viewing and buying public. We hold regular workshops and plein air painting trips and have initiated a painting group, operated by the Southland Art Society, which meet on the first and third Monday of each month.
My interests are mainly in landscape/seascapes, animals, ships and still life subjects. I have twice entered and been a finalist in Telecom Art Awards 1999 and 2000. I sell work on commission, privately and at exhibitions and have been moderately successful having sold some 50 works since I began back in 1989.
I enjoy talking about art, especially pastel, and encouraging others keen to have a go at the medium. Having taken early retirement from my journalist career, I can now devote more time to doing what I enjoy doing, and that is art.